All Windows 10 upgrade safeguards have been lifted

Microsoft resolved the last long-standing upgrade issues in Windows 10 version 2004 and 20H2 this week. The company uses upgrade safeguards to block updates to newer versions of its Windows 10 and Windows Server operating systems to prevent issues during or after the installation of the updates.

Downside to the safeguards is that some devices are not offered the upgrade to a new version of Windows 10. In this particular case, it meant that affected devices running Windows 10 version 1909 could not be upgraded to newer versions of Windows 10 using Windows Update. 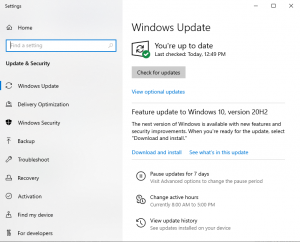 Windows 10 version 1909 consumer editions — Home, Pro, Education and Workstations — reach end of life in May 2021. Microsoft plans to release a last batch of security patches for Home versions of the operating system on May 11, 2021, the May 2021 Patch Tuesday before support ends.

Microsoft lifted the last safeguards on May 7, 2021 which prevented the upgrade to newer Windows 10 versions using Windows Update for devices with certain Conexant audio drivers and Conexant ISST audio drivers.

The issues were opened a year ago in May 2021. Microsoft published a workaround but the issue was not fixed until this month. Some devices may be rolled back according to the resolution and Microsoft asks administrators to run the update again when that happens.

The two upgrade safeguards were the last two listed by Microsoft on the known issues pages of Windows 10 version 2004 and 20H2. Affected devices should receive update options within 48 hours of the lifting of the safeguard.