Check for any USB port in the list. The affected printer and the USB port that it is connected to should not be displayed on the page. 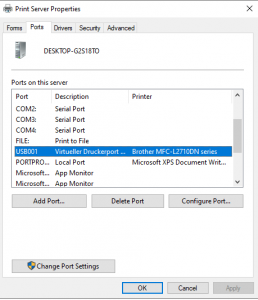 Microsoft describes the symptom in the following way:

If you connect a USB printer to Windows 10 version 1903 or later, then shut down Windows and disconnect or shut off the printer, when you start Windows again the USB printer port will not be available in the list of printer ports. The printer cannot be used for printing tasks or other tasks because of the missing USB printer port.

Microsoft lists the following cause for the issue:

There is a workaround for the issue, and it is quite easy to apply. All that needs to be done is to connect the USB printer to the PC and power it on before Windows is started. If that is done, Windows will recognize the USB printer and printing functionality as well as other functionality provided by the printer is available during the session.

Microsoft is working on a permanent fix for the issue and plans to release it as part of a future Windows 10 operating system update.