Even though the Netflix app is available on a variety of platforms, there are some solutions for fixing a faulty app that work across the board no matter what device you’re using. 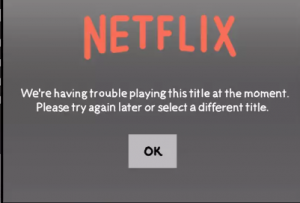 Check if Netflix is down. If the Netflix app fails to load or a film or TV show won’t start, it could simply be because the Netflix service itself is down or offline. Use that link to see if there’s an issue with Netflix’s servers. If there is, there’s nothing you can do but wait for them to fix it.

Restart your device. It’s become almost a bit of a cliché but restarting your device will actually often fix a faulty app or system problem.

Check your internet connection or phone signal. If your internet is down, Netflix won’t work. Make sure your Wi-Fi or cellular connection is switched on and that your device hasn’t been put in Airplane mode by accident. Also try other apps to see if they can connect to the internet.

Reboot your router. If your internet is down or you seem to be connected but apps aren’t working properly, the problem may lie with your network hardware.

Update your Netflix app. As with a system update, it’s equally important to keep the Netflix app up-to-date as the latest version may be needed to run on your device or to connect to the Netflix servers for streaming media. An app update could also fix any Netflix error codes, for example, the error code UI-800-3, that you’re getting.

Log out of Netflix and Log in again. A simple solution but an effective one and it only takes a few minutes to do.

Sign out of Netflix on all devices. Occasionally, using Netflix on multiple devices, even if your membership allows it, can cause conflicts within the Netflix servers. This can be fixed by logging out of Netflix on every device all at once. You can do this on the Netflix website in the Account settings that are accessed via the top-right icon after logging in. Make sure to click on Sign out of all devices, wait a few minutes, and then log back in on your device again.

You can also do this from the app on your mobile device. Open the More menu at the bottom, tap Account, and then choose Sign out of all devices.

Update your operating system. Whether you’re using a smart TV, gaming console, smartphone, or a tablet, you should always try to keep it up-to-date with the latest operating system as some apps will stop working if they know a system update is available. A system update can also fix any bugs that may be preventing the Netflix app from working properly. Obviously, we listed this last because it’s a bit on the extreme end of things to try/do.

Call your internet service provider. At this point, if Netflix’s servers are working properly and you’ve tried all that you can to get the app working, the reason Netflix is down might be due to an issue with your ISP, which is out of your control.