Home /.Solutii /How to Update Your Raspberry Pi to the Latest Raspbian OS

Released in June 2017, Raspbian Stretch has had several incremental updates since, with standard updates such as improved Bluetooth and account security being enhanced with a first-boot setup wizard, and a new app store.

Raspbian itself comes with a bunch of bundled tools, from the Chromium browser (although this won’t work on the Raspberry Pi 1) to a number of useful programming-based applications and utilities. There’s also Claws Mail, the LibreOffice suite, and not to mention Minecraft PE!

To update Raspbian, you need to open the Terminal. Do this via the desktop menu, or by pressing Ctrl + Alt + T. You can also do this by connecting to your Raspberry Pi from another computer via SSH. 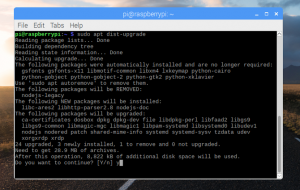 When this is done, run the upgrade command:

Follow any prompts, and wait for the Pi to be upgraded. When you’re done, type:

This will discard any unneeded files that have been downloaded as part of the upgrade. Finish by restarting:

When your Raspberry Pi has restarted, you’ll be using the latest version of Raspbian. Well done!