Google Play Music is going away. Google’s first music service will be shut down by December 2020. To keep your data, you’ll have to switch to YouTube Music—or download it. Here’s what you need to know.

When is Google Play Music Going Away?

You will no longer be able to use the Google Play Music app to stream music starting October 2020. (The cutoff date is September 2020 in New Zealand and South Africa.) If you’re currently paying for a Google Play Music subscription and don’t transfer your account, Google will cancel your subscription at the end of your billing cycle in October (or September in New Zealand sn South Africa.)

However, you will be able to transfer everything you have in Google Play Music—your playlists, music uploads, purchases, and likes—to YouTube Music. The transfer service will be available through the end of December 2020.

After December 2020, Google will delete your Google Play Music data from its servers.

Whether you subscribe to Google Play Music’s streaming library or you’ve uploaded some of your own songs and you use Google Play Music to listen to them—or both—you can continue using YouTube Music to play your music after the switch. 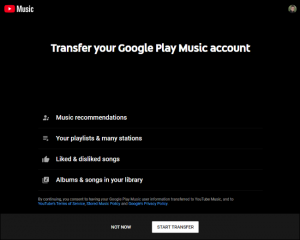 If you’re an existing subscriber, you’ll now be billed through YouTube but your monthly subscription price and benefits will stay the same (“unless you are in a location with fluctuating currency,” according to Google.) Even if YouTube now charges extra for the benefits you’re paying for, you’ll keep any discounts you have.

If you’re done with Google’s music services, you can also download any uploaded music and take it with you.