If you monitor the connections your computer makes, you may have noticed that a program called pingsender.exe is making regular connections to the Internet. Depending on the program or service that you use to monitor connections, you may get additional information right away. Windows Firewall Control for instance displays the remote IP address of the connection attempt, and the organization that signed the executable files.

That organization is Mozilla Corporation, and the IP address belongs to Amazon’s cloud service AWS. 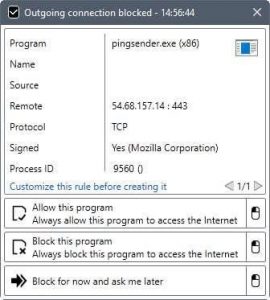 You may have noticed as well that pingsender.exe springs to action whenever you close the Firefox web browser. The article “Getting Firefox data faster: the shutdown pingsender” by Alessio Placitelli provides additional information on the executable file.

Firefox collects data if telemetry collecting is enabled. The browse transfers the data regularly to Mozilla in intervals. A big chunk of data was sent to Mozilla on the start of the next browsing session up until recently.
The issue was that this could mean that Mozilla would get the data hours, days or even weeks after it had been collected by the browser.
Pingsender is activated from the second browsing session on. It is launched as a separate process during Firefox shut down, and attempts to send the telemetry data that was collected during the browsing session to Mozilla.
Mozilla managed to reduce the sending time significantly. According to Placitelli, 85% of pings reach Mozilla within an hour, and 95% do so within the first 8 hours. Only 25% of pings reached Mozilla in the first hour without pingsender, and it took 90 hours to reach the 95% level of pings without pingsender.
In short: Pingsender is a separate process that Firefox spawns on shut down to send telemetry data to Mozilla.
Firefox users may load about:telemetry in the browser’s address bar to check the data that Mozilla is collecting.
Those who don’t want to provide Mozilla with data can turn the data off under about:preferences#privacy.

Another option is available. If Pingsender.exe is the problem, you may turn that feature off in the following way: