It’s easy for video conferences to feel overwhelming when there are a lot of people on the call. “Breakout Rooms” is a feature in Google Meet that makes it easy to divide into small groups. “Breakout Rooms,” which can also be found in Zoom, is the same concept as working in small groups in a real-life office or classroom. You can all gather in the main conference call, break out into smaller rooms for a while, and then reconvene. This all happens in the same meeting.

First, you’ll need to be in a Google Meet meeting on your desktop PC that you started or scheduled. Click the shapes icon in the bottom right.

Click “Set Up Breakout Rooms” to get started creating the rooms.

Now you can choose the number of rooms you want to have, set a timer for how long the rooms will last, or “Shuffle” the participants into groups. “Clear” will empty all the rooms. 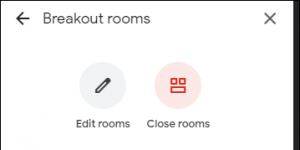